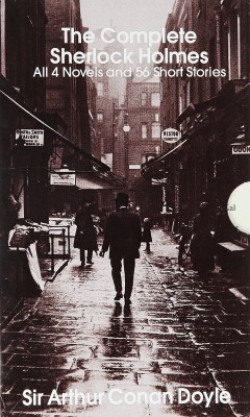 Flipkart has The Complete Sherlock Holmes #2 Boxed Set on sale for INR ₹312 Only.

The Complete Sherlock Holmes: All 4 Novels And 56 Short Stories consists of all the stories featuring the infamous Sherlock Holmes and his sidekick Dr. Watson. Summary Of The Book The Complete Sherlock Holmes: All 4 Novels And 56 Short Stories is ideal for Sherlock Holmes fans, and lovers of old fashioned crime and mystery novels. The stories featured in this book display Holmes’s detective skills, his ability to solve difficult cases quickly, his knack at using logical reasoning and forensic science, and his talent at disguising himself. And not too far behind is Dr. Watson, Holmes’s ever so wise and loyal partner, who religiously pens down all their adventures. This collection contains four novels and fifty six short stories. The titles of the four novels are A Study In Scarlet, The Hound of the Baskervilles, The Sign of The Four, and The Valley of Fear. Some of the titles of the short stories included in the book are The Adventures of Sherlock Holmes, The Return of Sherlock Holmes, The Memoirs of Sherlock Holmes, His Last Bow, and The Case-Book of Sherlock Holmes. Many of the stories featured in The Complete Sherlock Holmes: All 4 Novels And 56 Short Stories were turned into Hollywood movies. The movie titled Sherlock Holmes, starring Robert Downey Jr. and Jude Law, was released in 2009. It was nominated for two Academy Awards. In 2011, A Game of Shadows was released featuring the same Hollywood actors. The Complete Sherlock Holmes: All 4 Novels And 56 Short Stories was published in 1986 by Random House Publishing Group. About Sir Arthur Conan Doyle Sir Arthur Conan Doyle was a novelist, poet, physician, and short story writer, who was a native of Edinburgh, Scotland. He has authored numerous literary works. Some of the books written by him are The Lost World, The Poison Belt, The Parasite, and The Maracot Deep. Doyle was a prolific writer, often using elements of fantasy and science fiction in his writing. Apart from writing, Doyle was also a trained physician and an avid football player. He was also friends with notable people such as Harry Houdini, Joseph McCabe, and Richard Milner. He was married twice, and fathered five children. Following the death of his second wife, a few family members, and his son, Doyle sank into deep depression. He later turned to spirituality in order to understand the meaning of life beyond death. He passed away in 1930 at the age of 71, after suffering a heart attack.

How to buy this product?

Go to product page https://www.flipkart.com/the-complete-sherlock-holmes-2-boxed-set-ST23h at Flipkart and buy the product.