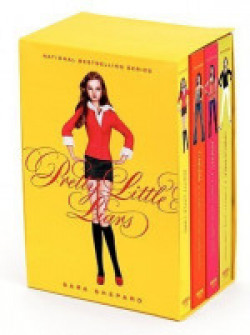 Pretty Little Liars (Set Of 4 Books) is a set of four novels hailing from the young-adult genre that describes a dark, tumultuous tale revolving around four high school friends who find themselves thrown into a series of gripping changes in their life, providing a storyline filled with suspense, drama, lies and intrigue. Summary Of The Book The premise of Pretty Little Liars (Set Of 4 Books) revolves around Alison’s mysterious disappearance and the events that follow. Alison’s three closest friends from middle school, albeit putting on sombre exteriors, are secretly relieved. They all guarded dark secrets that only Alison was privy to. Her sudden disappearance causes a strife between the erstwhile close friends, they break off from each other and lead their own, separate lives. However, when a few years pass and they find themselves in high school, Aria Montgomery, Emily Fields, Hanna Marin, and Spencer Hastings are haunted by anonymous text messages, emails and notes that are sent to each of them, each divulging a dark secret only Alison knew of, in addition to details about their current life. Each of these notes issigned off with the letter ‘A’. But since Alison hadn’t been seen or heard of in over a year, who was sending them? The pilot book of the series, entitled Pretty Little Liars, provides a torrid introduction to the story and culminates on a cliffhanger, the girls still have no idea who A is. The second novel, entitled Perfect, revolves around the girls’ lives as they enter the complicated world of adulthood, their love affairs and deceitful ways, and their journey as they try to solve the puzzle and determine A’s identity. The third book of the series, entitled Flawless, sees the story progress, as Sean finds out a secret from A, and Emily’s parents come to know something important about their daughter. The final novel of this set, Unbelievable, reveals the true culprit. The story evolves with growing mistrust and suspicion between the four friends, set in a fast-paced influential suburb in Pennsylvania which thrives on gossip. Oodles of melodrama and intrigue interspersed with twisting plots revolving around the antagonist ‘A’ make this an entertaining read. The books have been adapted into a TV series. About Sara Shepard Sara Shepard, born in Philadelphia, is a well-known adult-fiction writer. Shepard has authored other books like The Lying Game, The Visibles and Everything We Ever Wanted. After completing her graduate degree and obtaining an MFA degree from New York University, Shepard had a series of jobs, but she always nurtured the idea of becoming a serious writer. She currently lives with her dogs and her husband outside of Philadelphia.