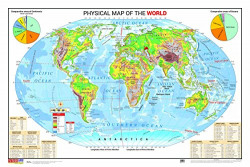 The physical map of the World displays all the continents and various geographical features across the world. Water bodies such as oceans, seas, lakes, rivers and river basins and landscape features such as plateaus, mountains and deserts, are all displayed. The land height and sea depth shaded according to height and their depth and the oceans and continents colored according to depth, which makes this physical map easy to comprehend visually. School children, who wish to increase their knowledge of world geography, will find this a valuable resource, as well as teachers and parents. Map also includes Continent with Area covered, Coldest place and Hottest place, Wettest place, Driest place, Largest oceans and seas, Largest Lakes, Longest Rivers, Largest islands, Highest peaks and deepest Trenches in tabular form. Continents- The physical land mass of the world, the planet Earth, is divided into seven continents of Africa, North America, South America, Europe, Australia, Asia and Antarctica (It being the only uninhabited continent). Asia with 29 percent of the world land mass is the largest and Australia with 5.9 percent of landmass the smallest. Mount Everest is the highest point on earth and Dead Sea the lowest.Deserts- Deserts occupy about 33 percent of the world land mass. Deserts, places on earth which have very little rainfall, can be either hot or cold. The largest cold deserts are the polar deserts of Antarctica and Arctic Circle. The largest sub-tropical or hot deserts are the Sahara and Arabian Desert. Gobi and Kalahari are other large deserts.Mountain ranges- Mountains cover 24 percent of the earth land mass and are spread over all the continents. Asia has the largest area covered with mountains and Africa the least- only 3 percent . Himalayas, the Earth's youngest mountains are also the highest. These mountains are still growing. Mount Everest at 8848 meters is the highest peak and K2 at 8611 meters, the second highest. Alps are the mountain ranges in Europe and Rockies in North America.Oceans-Over two-third of the Earth's surface is covered with water and more than 97 percent of this water is contained in the oceans. The Pacific Ocean is the largest and deepest ocean in the world. The other oceans are Atlantic, Indian, Pacific, Southern and Arctic.Lakes-The earth is dotted with lakes-bodies of fresh or salt water surrounded by a land mass. Northern hemisphere has the majority of fresh water lakes. Aral Sea, Dead Sea and Great Salt Lake are salt water lakes. Caspian Sea, if considered as a lake is the largest. Other large lakes are Lake Michigan in North America, Lake Victoria in Africa and Lake Eyre in Australia.Rivers-Rivers are watercourses flowing towards oceans, seas, lakes or another river. The Nile River, in Africa, with a length of 6695 kilometers is the longest in the world. The Brahmaputra and the Ganges are rivers in Asia. The Colorado and the Mississippi are rivers in North America. The Amazon, the second largest river, is in South America. River Congo, in Africa is the deepest river though it is the ninth longest.

How to buy this product?

Subscribe to Amazon prime https://amazon.in/prime to Skip Delivery Charges for 1 Year for Prime Products Along with Free Amazon Prime Videos